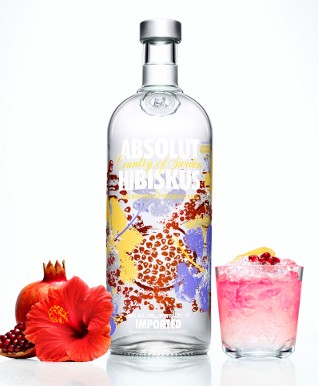 Absolut was established in 1879 and it is produced near Ahus in southern Sweden. Absolut is credited to have been the first to offer a flavoured vodka and has currently 20 core flavours. It is owned by the French group Pernod Ricard and the company is expending it’s line of vodka  to launch the newest flavour, Hibiskus Floral vodka.  The vodka  will be introduced in the USA this month  and released in select international markets this spring. The Hibiskus vodka is a blend of all natural hibiscus and pomegranate flavours. It is the company’s first floral flavoured vodka.  The Absolut web site describes the vodka flavour as, “bold, sophisticated, and fiercely original”. We like flavoured vodka and according to the consumer marketing site Technomic, “the consumer interest in flavoured vodka is expanding, evidenced by the 23.3% gain since 2011.” Hibiscus has a unique flavour and is known as an ingredient for alcoholic beverages and soft drinks. Using floral spirits in cocktails can be exciting,  flavourful and even exotic, but only when used in the right proportions. Floral essences have been used for centuries and this unique flavour category is making a resurgence. Beefeater launched a summer edition a few year ago, which includes hibiscus flowers. The vodka will be offered in a 1l, 750ml, and 50ml sizes.