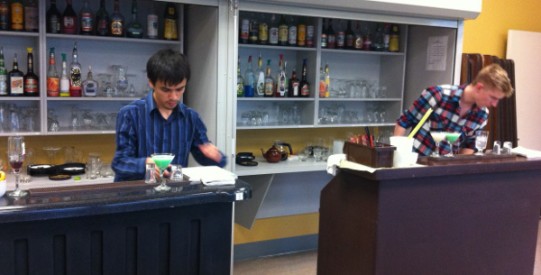 HIGHBALLS
It is a simple drink that can be made in a hurry. These types include various drink categories. Most of them are easy to make for everyday drinking.
METHOD: build
RECIPE STANDARD: spirit + juice or pop
I.E: screwdriver, cuba libre, bloody mary

LOWBALLS
This type is similar to a highball but has smaller quantity of liquid and are served in a lowball glass such as a rock or an Old Fashioned.
METHOD: build (sometimes shaken)
STANDARD RECIPE: spirit(s) + liqueur or mixer
I.E.: black Russian, old fashioned, brown cow, negroni

BUCKS
They are tall drinks made with ginger ale, and originally only gin was used. Today, they are simply called a highball and made with all type of spirits.
METHOD: build
STANDARD RECIPE: spirit + ginger ale.

MARTINIS
CLASSIC GIN MARTINI
It is the quintessential American cocktail. The classic cocktail era starts from the beginning of the twentieth century to the wartime lounge.
METHOD: stir
STANDARD RECIPE: gin + dry vermouth + olives for garnish

HOT DRINKS
They are similar to hot punches. The basic difference is that they are made for a single serving.

FLIPS
They were originally hot drinks made with a whole egg and a variety of liquors or wine. Today, flips are served cold except for the classics.
PREPARATION: shake
STANDARD RECIPE: spirit or port wine + sweetener or liqueur + mixer + egg
I.E.: brandy flip, porto flip

CRUSTAS
They are small sour drinks that are served in a sugar-rimmed glass. The Brandy Crusta is considered to be the original.
METHOD: shake
STANDARD RECIPE: spirit +lemon juice + maraschino liqueur
STANDARD GARNISH: lemon rind in the glass + sugar-rimmed glass
I.E.: brandy crusta

Visit Cocktail Hunter for your next bartender lesson.