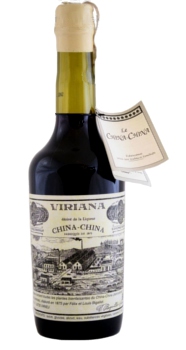 Bigallet Viriana China-China is an artisanal liqueur from the French Alps,  and being produced since 1875. It is made from a blend of sweet and bitter orange peels which have been macerated and distilled in alembic stills. A delightful bouquet of aromatic  plants  with  a  pinch of sugar give  this liqueur  its  unique  character.  The  result is a  classic and  unique bitter liqueur similar to Italy’s Amaro drink. Traditionally, Viriana China-China is drunk as a digestif, and can be served neat or on ice. It can also be used as a substitute for bitter liqueurs and vermouths  in various cocktails.

1872 – Felix Bigallet created a liqueur and syrup distillery in Lyon (south-eastern France) to supply pubs, inns and the new merchants of the industrial era. At the time deliveries were carried out by horse and cart. In the beginning, Felix Bigallet only offered his customers traditional drinks such as Bitter, Amer and Quiquina. Grenadine and gum syrups were only used to sweeten aperitifs.

1885 – Due to the need for larger premises, the company decided to move to Virieu-sur-Bourbe in the Alpine foothills of Isère (Bigallet’s family home).This also meant that they were near the Lyon- Grenoble train station. The railway made the importation of all the required raw materials easier for Bigallet; wine from the south of France, sugar loaves from the Antilles, rum from the West Indies, lemons from Sicily and oranges from Spain or northern Africa.

1946 – Syrups became the company’s main product, particularly the famous Citronade. It is a colourless syrup created from lemon zests and sugar cane syrup, a real “nectar” which today continues to be produced in the same traditional method as when it was first created. More information can be found at the Bigallet web site.

TODAY – Every year Bigallet goes on creating new and innovative flavours, taking inspiration from its own roots in the heart of the French Alps. The continuing artisanal methods place Bigallet syrups and liqueurs into the luxury culinary products.

The tradition continues. This is the last few days of ‘zestage‘ at Bigallet, which takes place annually from December to February. The lemons and oranges arrived directly from Spain and the zests are quickly put in alcohol to macerate for a few weeks before being used for Viriana China-China. The pictures are a courtesy of Giffard.