Breaking News
What Is A Wine Club And How Do I Join The Best One?
The Travelling Cocktail Drinker: The Best Bars in Dublin
Fun Halloween Cocktail Garnishes
Coming back online // you can’t wear a mask and drink at the same time
30 Oct, 2020
Skip to content 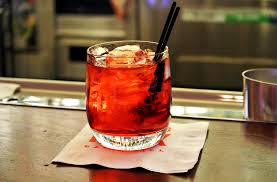 One of the most underrated classic cocktails, the simple Negroni is a potent combination of gin, Campari and sweet vermouth. With only the slow melt of the ice to water it down, this is a tipple best savoured slowly, in order to ensure you can enjoy more than one! So, how did this blend of alcoholic ingredients come to be recognised as one of the best cocktails of all time?

Who Invented the Negroni?

This cocktail was brought to life in Florence, Italy, in 1919, when Count Camillo Negroni ordered a drink at Caffè Casoni. Negroni was fond of an Americano cocktail – a drink that combined Campari and sweet vermouth with club soda and an orange twist. On this particular day, Negroni decided that his favourite tipple wasn’t strong enough and so he asked for the drink to be strengthened by replacing the soda with gin. The drink obviously hit the spot and quickly became the Count’s new favourite. When other patrons of the bar learned of the cocktail, they would simply ask to be served Count Negroni’s drink.

Most historians are happy to accept this version of events. However, Colonel Hector Andres Negroni is insistent that there was no such person as Count Camillo Negroni. He believes the drink was invented by General Pascal Oliver Comte de Negroni, a French cavalry officer involved in the Franco-Prussian war. It is thought he invented the drink when posted to Senegal between 1855 and 1865.

It didn’t take long for the drink to make its way to international climes, with Orson Wells enjoying one for the first time when visiting Italy in 1947. The drink grew ever-more popular around the world, so that in 2013, Negroni Week was created by Campari and Imbibe Magazine, ensuring the drink never falls out of favour thanks to its annual revival.

Whether you stand on the side of Italy or France, there is no denying that this is an incredibly moreish cocktail that makes the perfect accompaniment to a lazy day in the sun.

Variations of the Negroni

No drink can truly be considered as a classic cocktail unless it has been edited in some way. The Negroni is no exception.

The White Negroni substitutes Suze instead of Campari, while Count Mast Negroni uses Jagermeister. Of course, you could always go with the original Americano, which follows the same recipe but uses soda instead of gin.