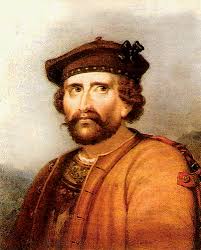 An irresistible combination of vermouth, Scotch whiskey and bitters, this smooth, tasty cocktail is very similar to a Manhattan. The main difference is that the whiskey of choice in a Rob Roy is always Scotch. Unlike many other classic cocktail recipes, the history of the Rob Roy is pretty well-known, with few others contesting the truth of the story.

Who Invented the Rob Roy
Cocktail?

The drink was created
in homage the Scottish hero Robert Roy. Robert Roy, or Robert MacGregor, as he
was also known, was actually an outlaw who lived in the Scottish highlands.
Despite being on the wrong side of the law, he became known as the Scottish Robin
Hood and was the inspiration behind many a folk tale. It was these exaggerated
stories that led to Roy’s royal pardon in 1726 and how he became an inspiration
to many.

The tales continued
long after Roy’s death in 1734, and eventually an opera made its way to New
York in 1894. Created by Harry B. Smith and Reginald De Koven, two well-known
composers at the time, the opera was highly anticipated event. A bartender at
the Waldorf-Astoria hotel, situated just round the corner from the theatre, felt
it was only fitting that the show was promoted via a cocktail, and so he made
up the whiskey-based drink.

Variations of the Rob
Roy Cocktail

The most obvious
variation of the Rob Roy is to replace the Scotch whiskey with Rye to create a
Manhattan. In doing so, you would also have to change the cherry or orange
twist garnish to an olive one. However, there are lots of other ways you can
mix up this cocktail to make something completely new.

The Perfect Manhattan focuses on the use of vermouth, substituting half of the sweet variety for a dry vermouth. This drink also uses Rye whiskey, although the garnish remains the same.

The Brooklyn cocktail also prefers the use of Rye whiskey but switches the vermouth completely to a dry variation. A little maraschino liqueur and French bitters adds a sweet-sour flavour that is incredibly moreish.

The Rob Roy is a drink
that invites variations simply in the ingredients it uses. As an amateur bartender,
it can be fun to play with the different whiskeys and vermouths used, as each
brand will add something slightly different to the cocktail. Let us know your
favourite ingredients!

History of the Fitzgerald

Cocktails for Mums Who Have Been Homeschooling