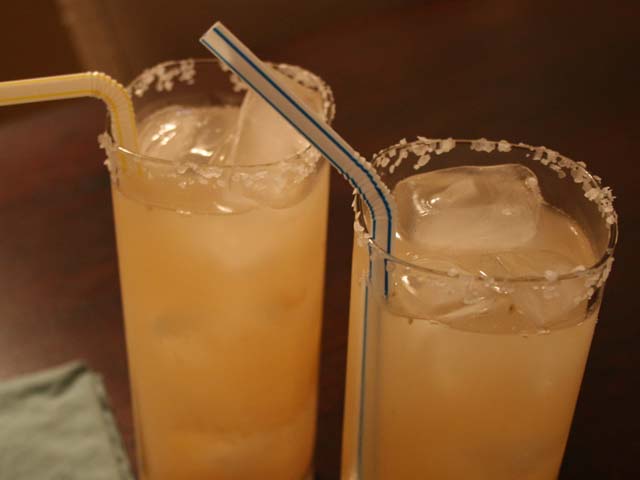 A classic cocktail that has become somewhat underappreciated in recent times, the Salty Dog is the perfect cocktail to enjoy while making the most of every last bit of summer sunshine. Incredibly easy to make and super satisfying on a hot day, the ice-cold Salty Dog is well overdue a revival. So, where did this fruity delight come from?

Who Invented the Salty
Dog Cocktail?

The Salty Dog was originally created as a variation of the Greyhound cocktail. George Jessel added a salt rim to the popular combination of gin and grapefruit juice sometime in the 1950s, as a way to increase the palatability of the drink for those who were less than fond of the bitter grapefruit taste. The Salty Dog soon became more popular than the Greyhound, but it does mean that the histories of both drinks are intertwined, since the creator of the Greyhound had a hand in the fortunes of the Salty Dog.

First mentioned in the
Savoy Cocktail book in the 1930s, the Greyhound is thought to have been created
by the author of the book series, Harry Craddock. Originally from London,
Craddock had moved to America to further his bartending career. He spent most
of the 1920s and 1930s in the States, returning home when prohibition hit and
working at the famous Savoy hotel.

It is thought that the Greyhound was created just before the move, since gin was a more popular spirit overseas than vodka, which is now the preferred spirit for most in this drink. It became a popular drink at the Savoy hotel, but really came into its own when Jessel adapted it to create the Salty Dog.

The base spirit of the
Salty Dog is now vodka, although some bartenders do like to pay homage to the
original recipe and include gin. Since this is such a simple recipe, the
quality of the spirit is important – a good vodka should have very little taste
to it, instead allowing the natural bitter grapefruit tones to shine through.

The fact that
grapefruit juice is one of the main ingredients means that historians can
discount the possibility of any earlier bartenders creating the same cocktail.
Grapefruit is a fairly new fruit, relatively speaking, only existing due to a
cross-contamination of sweet orange and pomelo fruit. Whether the grapefruit
was purposely genetically engineered or whether it was the result of a happy
accident, is unclear, but it was extremely popular in the 1930s.

When ordering your
cocktail at the bar, make sure you remember the difference between the two
drinks. If you love the bitterness of grapefruit, enjoy a tasty Greyhound, but
if you prefer your drinks smooth and fruity, the addition of salt on the rim
might make this drink more enjoyable for you, in which case you will want the
Salty Dog!

Cocktails to Use Up Your Blackberries!

The Travelling Cocktail Drinker: The Best Bars in Kent

3 Ways To Revamp Your Bar For A Grand Reopening