Breaking News
The Best Cocktail Books to Read in 2021
The History of Vodka
Classic Cocktails for the January Blues
The Travelling Cocktail Drinker: The Best Bars in Lima
27 Jan, 2021
Skip to content 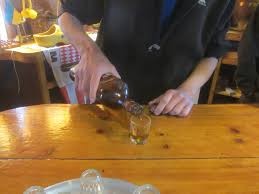 For a long time, this clear spirit was considered to be the most popular in the UK. It has recently been usurped by gin, but it still holds a special place in our hearts. Here is a story about how vodka came to be!

Where was Vodka Invented?

If you were to visit Russia, you would easily believe that vodka originated there. The locals are quite proud of their national spirit and create some of the most expensive varieties. However, the Polish are quick to refute these claims, insisting that they made it first, and nobody is quite sure who is correct.

However, it is thought that the spirit was first created in the 900s. It would have been used as a disinfectant in the first instance, making up an important part of every family’s first aid kit. It soon became a popular drink called ‘bread wine’ and flavoured varieties were created in the 1300s using herbs, honey and flowers. After the First World War, the drink started to spread across the world.

The first versions of vodka seem to vary depending on which country it came from. But generally, the alcohol was created by distilling ingredients such as corn, grains, potatoes or molasses. In Russia, they would sometimes use wood or grapes. The vodka would be distilled and filtered to reduce the flavour and colour of the liquid.

Vodka was so popular in Russia in the 17th century, that it was estimated a third of men owed money to a tavern owner for their habit. Farm work started to suffer and the government had to step in to regulate the sale of the alcohol. It was even banned for a while, forcing people to purchase their tipple on the black market. When it was reinstated, it was heavily taxed.

In Europe, UK and the USA, vodka is often consumed with a mixer. However, in Russia, the spirit has a slightly lower alcohol content and is almost always enjoyed straight. Russians drink their glass in one big gulp, sometimes with a juice chaser. Sometimes they add Vodka to their beer.

The poles drink their vodka in a similar way, but their variety tends to have a slightly higher alcohol content. In the early days of vodka-drinking in Poland, the spirit was considered to be a remedy for infertility and an aphrodisiac.

Today, the Russian remains one of the biggest Vodka producers, as does Poland, Sweden, Belarus and America. It is a key component for so many cocktails and can also be used in cooking.

The Best Cocktail Books to Read in 2021

Classic Cocktails for the January Blues

The Travelling Cocktail Drinker: The Best Bars in Lima